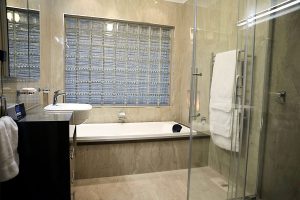 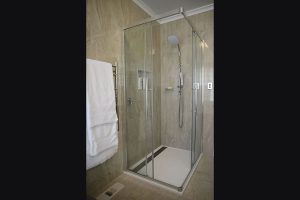 We had George from Q Bathrooms quote for and subsequently undertake a complete renovation of our bathroom and laundry areas. There were three major things that impressed us most.

The quote: George was competitive amongst the five other candidates, but George did what no other business did; he allowed us to visit a new construction site where he was providing all the tiling. It was a very impressive and up-market premises and his workmanship did it justice. Secondly, George allowed us to speak with a renovation client. This person said only good things about the two bathrooms he renovated for this gentleman. We were immediately sold on Q Bathrooms.

The construction: There were several things that impressed us with George’s workmanship:
·         His work ethic was such that the days were often 10- 12 hours long. George would not finish for the day until he was on schedule.
·         His tradespeople: Each tradesman arrived on time and carried out their work in a friendly and professional manner. There were no hold-ups waiting on the other trades to show up.
·         Cleanliness: As you may understand, a bathroom renovation is a messy job. George cordoned off areas with plastic sheet to minimise dust and completely cleaned up every day prior to going home. This included vacuuming the entire area.
·         Quality: George’s work was brilliant! Other trades people that have subsequently visited our house to undertake other jobs remark on how good the finished product is. What George does not tell many people is that he was awarded Tiler of the Year back in the day!

After sales support: We had one occasion when a minor fault developed with a door. George responded within 24 hours to affect the repair. He then spent some time chatting with me like an old friend.

We cannot recommend Q Bathrooms strongly enough. You will not be disappointed!

Member of the Master Builders
Association of Victoria.

Testimonials
Testimonials
"We are very happy with the job. It was a complete bathroom rip out and re-do in a period house. George was very honest and easy to negotiate changes with. The standard of finish was very high."
Susan - Ivanhoe
"They were very understanding and timely. I would be happy to recommend them to anyone"
Andrew - Bundoora
"Very efficient work within a set timeline, friendly and a team player, respectful to the other tradies in our house, good workmanship and worked with us every step of the way."
Graham - Preston
"George from Q Bathrooms was fantastic to deal with. He provided me with great suggestions on how to improve my Bathroom and I am very happy with the final results." Read More
Kathy - Glenroy
"We had our bathroom, laundry and toilet renovated by Q bathrooms and could not have been happier. Their quote was reasonable and competitive."
Read More
Karen & Darren - Fairfield
"Throughout the whole process, George was very informative, the work was completed within the timeframe we were advised and the worksite was left very clean at the end of each day." Read More
Jack & Connie - Essendon
"We had our bathroom fully renovated and kitchen tiled by George at Q Bathrooms. We couldn't be happier with the end result."
Read More
Adrian & Lauren - Kensington
prev next
Contact